You are here: Home / Tips / Property tips / Adelaide only capital city to avoid decline in dwelling values as regional...

Dwelling values have experienced their smallest national month-on-month fall in a year, according to CoreLogic.

The pace of Australia’s housing downturn eased further in May, according to CoreLogic.

The research firm’s May 2019 home value index results showed national dwelling values were down 0.4% over the month – the smallest month-on-month fall in a year.

Although at a broad level dwelling values are still trending lower across the regions of Australia, the pace of declines eased further in May, continuing a trend that has been evident since the beginning of 2019.

CoreLogic head of research Tim Lawless said the improvement was primarily being driven by a slower rate of decline in Sydney and Melbourne where housing values were previously falling at the fastest rate of any capital city.

“Sydney values were 0.5% lower over the month while Melbourne values were 0.3% lower; the smallest decline in values across both cities since March last year,” he said.

“In other cities, where housing market conditions have generally been more resilient to a downturn, the trend is the opposite.”

Adelaide (+0.2 per cent) was the only capital city to avoid a slip in housing values across the month, and in ‘rest-of-the-state’ areas, South Australia, Tasmania, and Northern Territory were the only regions where house values rose in May. 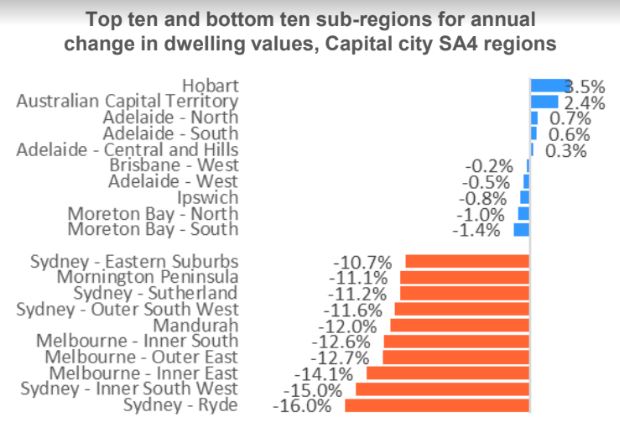 “Although clearance rates remain low relative to several years ago when the housing market was much stronger, the improved auction performances align with the easing rate of decline,” he said.

Since peaking in October, 2017, national dwelling values have reduced by 8.2 per cent, with values across the combined capitals index down 10.1 per cent.

According to CoreLogic, regional values have been more resilient, falling by 3 per cent since peaking.

Larger capital city falls have been recorded in Darwin (-29.5 per cent) and Perth (-19.2 per cent), as well as regional WA (-32.5 per cent), where the mining downturn has led to persistently weak economic and demographic conditions.