Yet another reason for property investment in Adelaide!

You are here: Home / Tips / Property tips / Yet another reason for property investment in Adelaide!

Yet another reason for property investment in Adelaide!

ADELAIDE has made it to a UK newspaper’s list of best places to live overseas.

The list was part of a month-long series on the best places in the world to live, published by the News Corp-owned Sunday Times.

The overall winner of the series was the Spanish city Palma de Mallorca but Adelaide was named first on an alphabetical list of best places to live overseas.

The City of Churches was described Adelaide as “one of Australia’s best-kept secrets”.

“Small and perfectly formed, Adelaide is one of Australia’s best-kept secrets, full of elegant tree-lined boulevards, homes with lacy verandas and beautiful parks and gardens,” the paper gushes.

“It has the prettiest cricket ground in the world – the locals are obsessed with the sport – and one of the starriest night skies”.

“The central food market will satisfy every culinary craving, while the vine-clad Barossa Valley is on the doorstep.

“It also has the lowest house prices of any Australian main state capital: an average of Aus$520,000”.

Other cities on the list include Amsterdam, Florence, Austin, Barcelona, Hong Kong and San Francisco. 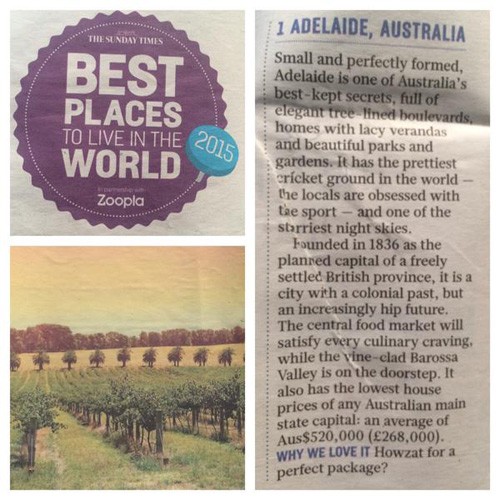